A PARISH vicar in Hampstead has warned that the neighbourhood is in danger of becoming a “monochrome, rich ghetto”.

The Rev Alistair Tresidder, of St Luke’s Church, was speaking out as he urged the council to block a new housing development on land in Kidderpore Avenue, formerly part of King’s College estate, which is designated a site of nature conservation due to its gardens.

Home-builder Mount Anvil is due to learn tonight (Thursday) if it has won planning consent for the prime site. It has faced criticism for including plans for an underground car park large enough for nearly 100 cars.

Mount Anvil claims that a redevelopment scheme will not be viable if it has to meet Camden Council’s planning goal of 50 per cent  affordable or social housing of the 156 homes to be built.

Instead, it says 20 per cent of the project will be “affordable”, estimated by the developer to be around 80 per cent of market value.

Mr Tresidder, who has lived in a vicarage in Kidderpore Avenue for 17 years, said: “I would not want to stop every development or imagine there was a golden era that needs to be preserved in aspic – but there must be sensible provision for what an area really needs. 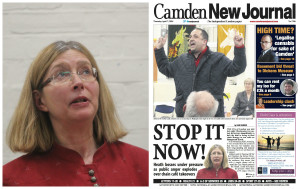 “Our neighbourhood must not become simply a place for rich people to pour their wealth into underground rooms and become a monochrome, rich ghetto.”

Calling on the Town Hall to dismiss the current plans and asking developers to re-draw the project, he highlighted how the site had a long tradition of providing facilities which benefited everyone.

He said: “Westfield College was founded in the 1800s here by Ann Dudin Brown. It was avant garde, feminist, intellectual and groundbreaking.

“We do not need a gated estate. We need  a good  mix of social and affordable housing as well as private homes.

“The opportunity to create something for our community will be lost for ever unless the proposals are seriously redrafted.

“This development can be much more modest, and mixed – socially, so that it does not become a rich-only ghetto; educationally, so that children can be walked safely to school; environmentally, so the bats who fly in my garden can continue as they have done for a century; and for the community.”

He added: “Since the widening of the A41, this side of St Luke’s Parish has become an anonymous and centreless set of roads – no shop, no post office, no pub.”

A Mount Anvil spokesman said “Kidderpore is a beautiful, historic and highly complex site. Over the last year we have consulted extensively, working in collaboration with the council, residents and community groups to develop a carefully considered, holistic plan.

“As well as providing more than £4million to fund improvements within Camden, our proposed redevelopment will see the sensitive restoration of several dilapidated, grade II-listed buildings, create much-needed, high-quality new homes – both for private sale and affordable – and open up previously private gardens for public use.”

From the Islington Tribune

From the Islington Tribune